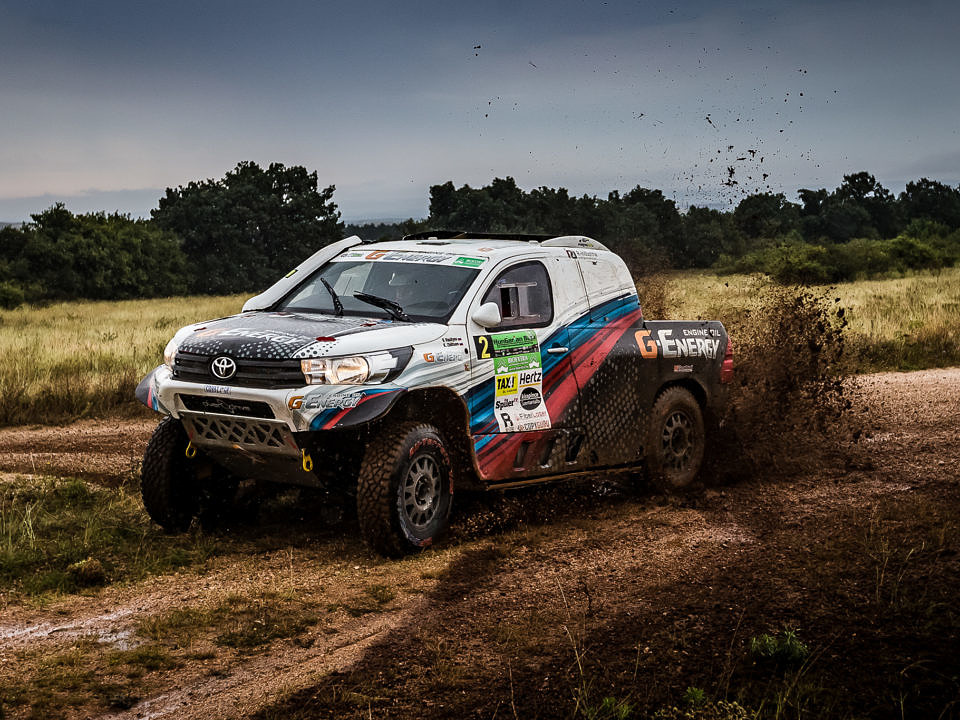 11.08.2018
The 15th Hungarian Baja has finished today in Veszprem – the seventh round of the FIA World Cup for Cross-Country Rallies brought the G-Energy Team crew points for the third place of the overall standings.
The race winner is the crew of the Spaniard Juan “Nani” Roma; the second position was taken by the Polish driver and the current series leader Jakub Przygonski, and Vladimir Vasilyev was able to secure the third position.
The organizers split the Baja distance to two days; yesterday spectators and crews could be satisfied with only a short Prologue, but today 409 high-speed kilometers packed into two sections of two special stages separated by a small neutralization zone were planned for the participants. But the weather has made its own adjustments to the length of the race distance. Taking into account the poor condition of roads after night rains, the sports commissioners board reduced the SS-3 (SS-5) distance from the previously planned 182 kilometers to 153, at the same time increasing the time limit. However, after the first section, the planned SS-5 had to be cut again, now up to 110 kilometers.
The race track ran along the fields, river mouths and hills. The shooting range dense ground was replaced by a sandy surface, that changed again to the smooth public roads. The abundance of intersections and interchanges made a variety in the “navigational picture of the world” for each co-driver that of course, brought interest to the game and added excitement to participation.
The Russians passed the morning short special stage without problems, they were the first at the finish of the 22-kilometer track. However, at the next SS the crew had a hard time – it was very difficult to drive the first on a wet road, slackened after a night rain, so at the third stage of the race Nani Roma became the race leader, he overtook not only Vasilyev, but also Jakub Przygonski.
The second section of the day was to completely repeat the previous one. The Spaniard was the leader at each of the two final stages. Jakub Przygonski’s ambitions with the hope of another victory suffered as a result of the struggle with Juan “Nani” Roma, who turned out to be more successful in overcoming the distance. Martin Prokop was unlucky at SS-3, where he lost a lot of time to affect the fight for the Hungarian Baja podium.
The crew of Vladimir Vasilyev and Konstantin Zhiltsov in Toyota Hilux was able to reach the Baja finish without breakages and any problems. The place on the podium became a kind of gift to the driver for his birthday.
Vladimir Vasilyev, driver, “It started raining at night and it continued in the morning. We started the second, the track was very dirty, but we quickly caught up with Miroslav Zapletal and overtook him. After that we had to “open” the track, and it was not easy. At the second stage of the day everything dried up, but nevertheless there was dirt and puddles, although we drove in a different way – traces were visible. It is always more difficult to go first”.
Konstantin Zhiltsov, co-driver, “We are at the finish and there is a result – after such a serious accident [at the previous competition in Russia], it’s important for us to finish at this race. It is essential to overcome the psychological barrier after the accident at the Silk Way. The second special stage was more dynamic – real driving began, there were fewer puddles, it became faster and more interesting. I enjoyed it, although it was difficult: there were many junctions, the organizers made a bunch of tracks, paths, cuts, racers went in different directions. But we coped with it, the car is not damaged, everything went fine”.
The next round of the FIA World Cup for Cross-Country Rallies will be held in Poland at the very end of summer – on 30 August Szczecin hosts drivers from around the world.
Tags: Hungarian Baja