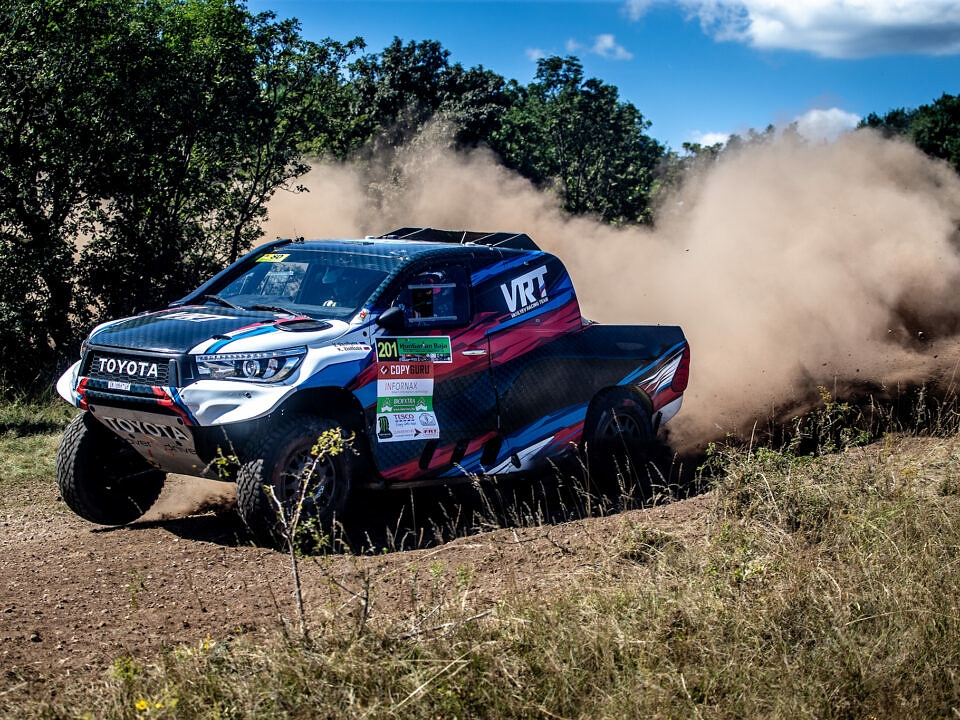 The crews of four leaders of the FIA World Cup for Cross-Country Bajas intermediate classification came to the series fifth round in Hungary to fight for precious points: Russian Vladimir Vasilyev (64 points), Argentinean Orlando Terranova (60 points), Pole Jakub Przygonski (46 points) and Czech Martin Prokop (44 points). The series calendar has hit its equator, and the points earned at each race become more valuable for everyone. The main attraction of the Hungarian Baja’s 16th edition should certainly be the duel of Vasilyev, defending his leading position, and Terranova, who won the last two races and does not intend to stop. Vladimir Vasilyev and Konstantin Zhiltsov are ready for such a challenge and are determined to fight for the FIA World Cup points – this race is very important for success in the series. After all, the victories in the hard battles are much “sweeter” than easy work.

The Baja actually started on Friday afternoon after all the pre-start formalities; by the way, they took place in the medieval Thury Castle in Varpalota – the raid week headquarters moved 20 kilometers east of the city of Veszprem. The race was opened by the super-special stage “Varpalota”, 7.18-kilometer long; according to its results the top ten finishers chose starting positions for the second day. The crew of Vladimir Vasilyev and Konstantin Zhiltsov had the fifth result at the end of the Prologue; and the choice is started by the one who took the last – tenth place. After the starting positions selection, at 20:30 local time, a Ceremonial start with passage of the podium took place. Vladimir Vasilyev, crew driver, “The Prologue was a normal special stage with a hard stone surface, and we had to shovel aside stones for everyone – we were the first to start. It can’t be called rally, it’s just a very short distance, but with an abundance of stones, ravines and the like. Unfortunately, we were unable to choose a successful starting position – tomorrow we will go first again, as those who chose positions after we did it moved us to the first position”.

Short races like Bajas require maximum concentration and inclusion in a tactical game from the very first kilometers. In Hungary in addition to good speed it is important to drive “wisely”, because every mistake on this technically difficult and weather-dependent route is expensive. The Hungarian Baja organizing committee took care of the race’s excellent distance – the participants were offered the Prologue and pleasant starting cares on Friday, and two special stages on Saturday, with neutralization zones at each of them and a total competitive distance of 416.12 kilometers. On Sunday there are 164.96 kilometers, divided into two special stages, with a service break. In total it gives the impressive 588.26 kilometers of competitive distance and 793.92 kilometers including liaisons.